Scott E. Rhoades is a painter from Coventry, Connecticut. His work has been featured in numerous Arts Center East exhibits, including winning Best-in-Show in the Harvest & Hauntings Exhibit, fall 2018. Some of Scott’s work was also included in the Animalia Exhibit, and Scott recently had a solo exhibition at The Arts of Tolland.

Originally from Houlton, Maine, Scott spent time when he was young drawing with his mother, but did not take his first art class until high school. As a junior at Eastern Connecticut State University Scott enrolled in an art class and thereafter changed his major to art. After graduating from Eastern he earned his Master’s degree in Art Education from Central Connecticut State University. In 1975 he began a 35-year art education career in Coventry.

As a teacher, Scott worked with thousands of students over the course of his career. He looks at his time as a teacher and his time now as an active artist as two distinct phases. “I liked being an art teacher but I was more involved with activities outside of my own painting.”Now Scott paints in his studio in his own backyard. After initially looking for a lot in Maine to build a cabin, Scott settled on building a studio at his home in Coventry. “I realized the cabin could be built in my back yard and be my art studio. A great decision. I designed and built it, enjoyed the process, and it is now a part of just about every afternoon.”

Scott is a disciplined artist and sticks to a regular routine. In addition to being an artist, Scott is a long-time avid runner, and even minored in Physical Education while at Eastern. “I run first thing in the morning, then perform a job needed around the house, and then paint in the afternoon.”

Working with acrylic paints, Scott’s subjects are largely taken from nature. Many of his paintings have a classic New England feel to them, often featuring birch trees, barns, and moose. But Scott takes inspiration from his further travels as well. “When I paint, I use photographs from my travels. It makes traveling interesting as I look for painting subjects such as old barns, nature, landscapes, and other things as I go along.” Though nature isn’t his only subject: “I like to bring old black and white historic images to color and experiment with portraiture.” And Scott isn’t short on subjects to paint. “I typically start about five or six paintings at a time as I like to work in detail and I paint whatever I feel most drawn to in a particular afternoon.” He has also worked on a number of commissioned pieces, from homes and vacation spots, to portraits children and pets.

More of Scott’s work can be seen on his website. 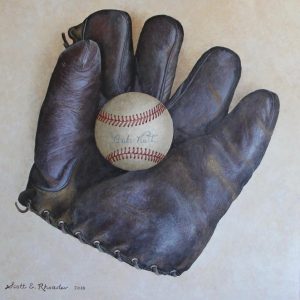