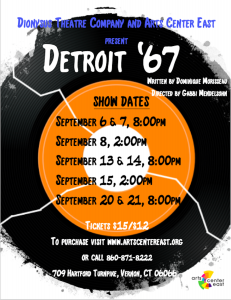 Set in 1967 Detroit, sister and brother, Chelle and Lank, have reinstituted their make-shift after-hours joint in their house on Twelfth Street, with all the hottest music of the day: The Temptations, Marvin Gaye, The Miracles, Martha and the Vandellas.

Chelle and her brother are offering some distraction and good time, “just trying to make a lil’ money the best way we know how” (Morriseau. Detroit ’67, Samuel French, 2014, p.16). Of course, the after-hours joint may not exactly be legal, and the city cops have been cracking down. But Lank wants more for himself and his family. “I’m tired of […] runnin’ joints outta my basement like I got somethin’ to hide. Like the only way I can be somethin’ is underground. I’m ready to be above ground just like them white folks. Ain’t no tellin’ what Detroit could be if we was all put to good use” (Morriseau. Detroit ’67, Samuel French, 2014, p.19-20). So Lank and his friend Sly have a plan for a new joint. But “The Big Four” have been targeting the Twelfth Street Neighborhood, and things are about to come to blows.

Detroit ’67 is the first of three plays written by Morisseau, each depicting a different era in Detroit’s history (the other two are Paradise Blue, and Skeleton Crew). Morriseau includes notes in her published play:

The real riots of Detroit, more accurately known as “The Great Rebellion,” started on an early Sunday morning on July 23, 1967. Every Detroiter of my post-riot generation has heard tales of our city’s ‘used-t-bes.’ Mammas and Daddys, Grandparents, Aunts and Uncles would tell us stories of shopping at Hudsons on Woodward (our main downtown avenue). Of riding the streetcar. Of the bustling downtown that once was (and is becoming again. Please believe.). This would be followed by a head shaking or a sigh at what has become of our city since.

But the thing is, I’m a romantic. I like to re-live my parent’s memories as if they were my own. I like to see the beauty in my city and remind us of who we are, what we did, and what we have the potential to become. So this play is not necessarily a history lesson. In fact, it can’t be. . .because I’m taking a lot of liberties with the truth here. Some of these locations mentioned in the play never existed. Some of them did. However creative I am choosing to be, I am not being unfaithful to the spirit of the city or the outrage that ignited the riots.

The truth is, there were police units called the Big Four that would ride around the city and harass the Black residents. . .particularly around Twelfth Street. The truth is, Twelfth Street was considered to be a ‘seedy’ part of town. The truth is, the riots began in this very neighborhood at a time when police brutality had run far too rampant, and an after-hours joint (also called a ‘blind pig’) located above a printing shop got raided. The truth is, the city’s disenfranchised were becoming social rebels. That is the truth. . .in this play and in real life. The rest of the lines between truth and fiction are my personal playwright secrets.

But what I will say is that wherever my creativity lies, it is always rooted in the soul of the family and elders from which my stories are born. This is a love song to my family and to Detroit (Morriseau, Dominique. Detroit ’67, Oberon Books Ltd, 2013, p. 5)

Dionysus Theatre Company was founded by Gabbi Mendelsohn, an English teacher and Drama Director at Rockville High School and award-winning playwright. DTC is “a theatre company whose goal is to inspire our community and ourselves through artistic expression while working to understand and explore the human condition” (https://www.dionysustheatrecompany.org). They have produced a number of productions at Arts Center East, including Hamlet, Proof, and The Diary of Anne Frank. DTC is not afraid to challenge performers and audiences with thought-provoking subject matter.

Initially when planning this season for DTC, Gabbi considered doing A Raisin in the Sun by Lorraine Hansberry. However, after seeing Detroit ’67 at Hartford Stage, Gabbi was inspired to change her mind. “After seeing the show,” Gabbi said, “I just wanted to take it in and process it and spend time with these characters.” A Raisin in the Sun remains one of Gabbi’s favorite plays; a story centered on family relationships and a family pursuing their dreams, but Detroit ’67 embodies many of the same themes. “It goes without saying that Detroit ’67 is still super relevant today. We still live in a world struggling with prejudices and inequality, but ultimately this play is a message of perseverance and hope despite the moments when the world is against you.”