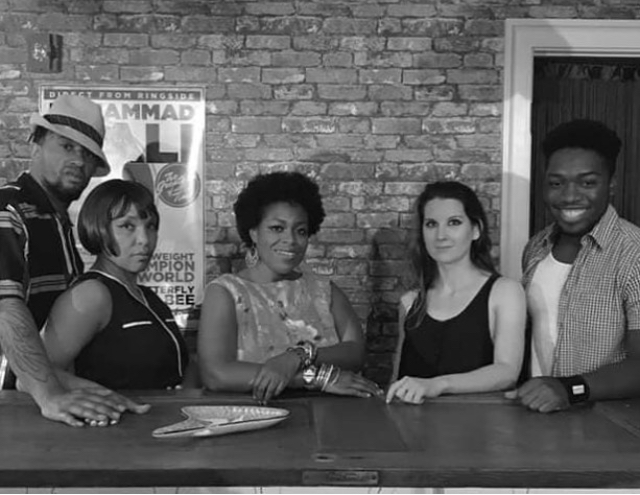 After a successful run of shows at Arts Center East, Gabbi Mendelssohn and Dionysus Theatre Company (DTC) are bringing their production of Detroit ’67 to Rockville High School. The show will be performed during the school day, Friday, September 27 for the 11th grade class. The 11th grade curriculum typically includes the acclaimed play, A Raisin in the Sun by Lorraine Hansberry. Both A Raisin in the Sun and Detroit ’67 tell stories of black families in 1950’s and 1960’s America, respectively, trying to achieve the American Dream, and confronting ideas of who has access to achieve that dream. A Raisin in the Sun is one of Gabbi’s favorite plays, and one she considered producing for DTC, but instead she chose Detroit ’67, after seeing a production at Hartford Stage. “After seeing the show,” Gabbi said, “I just wanted to take it in and process it and spend time with these characters.” Like A Raisin in the Sun, Detroit ’67 is a story centered on family relationships.

Set in 1967 Detroit, sister and brother, Chelle and Lank, have reinstituted their make-shift after-hours joint in their house on Twelfth Street, with all the hottest music of the day: The Temptations, Marvin Gaye, The Miracles, Martha and the Vandellas. Chelle and her brother are offering some distraction and good time, “just trying to make a lil’ money the best way we know how” (Morriseau. Detroit ’67, Samuel French, 2014, p.16). Of course, the after-hours joint is not exactly legal, and the city cops have been cracking down. But Lank wants more for himself and his family. “I’m tired of […] runnin’ joints outta my basement like I got somethin’ to hide. Like the only way I can be somethin’ is underground. I’m ready to be above ground just like them white folks. Ain’t no tellin’ what Detroit could be if we was all put to good use” (Morriseau. Detroit ’67, Samuel French, 2014, p.19-20). So Lank and his friend Sly have a plan for a new joint. But “The Big Four” have been targeting the Twelfth Street Neighborhood, and things are about to come to blows. Detroit ’67 is the first of three plays written by Morisseau, each depicting a different era in Detroit’s history (the other two are Paradise Blue, and Skeleton Crew).

“It goes without saying that Detroit ’67 is still super relevant today,” said Gabbi. “We still live in a world struggling with prejudices and inequality, but ultimately this play is a message of perseverance and hope despite the moments when the world is against you.” The play is emotionally charged, both for the actors and the audience. In light of this, the Sunday matinee performances at Arts Center East included a talk-back between the audience and cast and crew after the show. It’s this openness to engagement and discussion that Gabbi wants to bring to the high school audience as well. Prior to the performance, students will be given some background and historical context for the show. Afterwards, moderated by Arts Center East board member Joao Goncalves, students will be invited to reflect on what they’ve seen and ask the actors more about their characters and their experience with the play. “Detroit ’67 initiates a lot of dialogue and debate. It tackles issues around racism, white privilege, police brutality, riots, protests and rebellion Each of these topics are still very relevant today,” said Joao. “I am hoping the students will feel open to talk about the issues that the play raises and that they benefit from the dialogue.”

The RHS production will be staged in a way that is similar to DTC theatergoers. While the RHS auditorium has a capacity of approximately 800 audience members, this production will have a more intimate setting. Students will be seated on stage with the actors, similar to the stage set up at Arts Center East. This creates a more personal and immediate atmosphere for both the actors and audience, and also makes it easier to facilitate the closing discussion.

Beyond the message of the play itself, Gabbi hopes bringing the production to the high school will enhance the students’ experience with the material. While Rockville Highschool has a racially diverse population, “students don’t always see themselves on stage,” said Gabbi. “Each actor has a connection with their character,” commented Joao. “They have real life experiences that they bring to the stage.” This production will bring something different to the students, beyond just the words on the page.